We all get excited about any new device, be it that shiny new phone, or that amazing looking gadget hitting the store this season,….but have you ever thought about where all this is headed and what this would eventually lead to?

Its easy to get caught up in the moment and hype, but its incredibly important to be prepared for the future, now more than ever as technology advances at a lightning pace.

This is even more paramount if you work in tech and your livelihood depends on it, you maybe a UX professional (like me 🦄)- , a software developer, a software tester, someone who manages tech projects, or even someone who has invested in tech… this will effect your future.

Liquid UX is a concept which I created as one possible scenario to this future.

So what exactly is it?

…and along with all of these applications and devices, competition arises in every form. Right now having the best UX and CX is key to becoming theking in your space, gone are the days where functionality and functionality alone was king.

“The actual percentage % of time a day you spend interacting with these devices is drastically increasing over time.”

Thus bringing me to the first key element of Liquid UX….it will comprise of almost constant interaction with the user.

Liquid UX is a state in which interfaces will leave physical screens / displays and flow with you on to different mediums and exist in your physical reality. The distinction between the virtual and reality will be blurred so much to an extent which you will not be able to tell the difference. (Unless deliberately made to)

To further define my idea, I am going to have a set of elements to govern this idea, all of which must be fulfilled to be able to qualify as a liquid UX.

1. It will comprise of almost constant interaction.

You live your life as one constant series of experiences, whenever we interact with the virtual world, we make a conscious decision…

However with the concept of liquid UX, we can hope to see this as more of a constant interaction, where you need not initiate or consciously pull up a device to have an interaction.

It’s always going to be there with you.

“But wouldn’t that mean… I have no choice on whether to interact or not?”

It is reasonable to think so, however It is important to note that, your choice of what type of virtual entity/experience would be your choice alone, and this at some point will be engaged or activated by you. (Much like downloading an app today)… however…looking at how malicious software operates today, this does open up possibilities for new types of attacks. Again something that we may need to prepare for.

With today’s systems, year after year you get huge advancements in how virtual spaces look, with video games leading the way in virtual realities…in some instances almost looking like the real thing.

Virtual reality spaces are in some cases using actual video footage from the world around us to create an even greater effect of reality.

Mixed reality takes all this a step further and merges Augmented Reality (AR) with VR, to overlay virtual objects with the real world. This is probably one of the first steps we see today in the direction I am speaking of.

However, In my opinion we still can tell the difference with all of those experiences with that of reality, the reason being would be further illustrated in the next point.

Think about the last time you went to the beach? What defined your experience at the beach?
Was it the breeze you felt on your skin,…. or the texture of sand and the warm waters of the ocean?… or was it the smell or taste of the salty sea?…or the sound of the waves crashing on each other? …..or was it seeing the beauty of the sea?

I bet it was all of this combined as one to create this experience for you. All human experiences are defined with the combination of interconnected senses.

So for an experience to become a liquid UX, I believe it should play on all of our senses. As mentioned in the previous point, this is one key distinguishable fact why virtual and real experiences can be easily told apart.

There have been attempts to give an experience somewhat close to this. With some movie theaters labeling themselves incorrectly as 4/5/6/7/9D, and using VR, or 3D glasses, combined with mechanical chairs and water sprays and other mechanical parts to emulate some experiences. But these again are far from reality, and although they are quite fun, they yet again don’t match the criteria required for all 5 senses.

Which means that it is not enough just emulating the senses, but it should be done in an interconnected, and seamless fashion and it should be indistinguishable from the real thing.

With current advancements technology we have to some aspects saturated the experiences on some sensory channels. For example…

Many experiences today, require some sort of controller or conduit into the virtual world. A very basic example is the mouse and keyboard (which I used to interact with my computer to create this article). the touch screen display on your phone is another example. We have many input devices which reach into the virtual world to interact with it. These however advanced still act as conduits and controllers. We need these devices because we exist and operate in an analogue state and computers require digital inputs.

In a liquid UX world, It would need to be as natural as speaking to another person, and as mentioned in the point before, when all five senses are in play it would not be natural to interact via a controller or conduit.

5. Will be preemptive (user initiation not required)

Most of today’s interactions with the virtual require some sort of initiation. However combined with all of the points above, liquid user experiences will also need to be intelligent enough to understand how people behave and adjust interactions and actions accordingly. This is more into the realm of artificial intelligence. Some digital assistants today like Siri, Google assistant, and Alexa does this in a rudimentary fashion,… eg. they detect when you are home, and adjust devices accordingly, …in addition to this many mainstream devices today exist to detect emotions and facial expressions as well.

Detecting emotions can be quite challenging…. even as humans we have a hard time understanding the people around us. With the current state of facial recognition it is however possible to see some micro facial expressions, but again this still a way to go.

Another type of technology which involves depth sensing and 3D room scanning is increasingly gaining mainstream use. Devices like the Microsoft Hololens, Intels RealSense devices, and other devices, employs various methods to scan and track environments in real time.

Lets recap by looking at how liquid User experiences are defined …

1. It will comprise of an almost constant interaction.

5. Will be preemptive (user initiation not required.

I have been immensely fortunate with having the opportunity of playing around and designing experiences with almost all of the technologies mentioned in this article, as well as most digital mediums, screens and devices over the span of 13 years as a UI/UX engineer/designer.

I believe the concept I outlined is a futuristic view of where these experiences are heading to. It is difficult to speculate as to when these sort of experiences will come into being and if they would be exactly as I have described.

However just to throw in my rough estimate, I believe this would take about20 years to come into being…however…
…there are a lot tech advancements going on behind closed doors and it is possible that these would accelerate advancements or “surprise” us even sooner.

Another key factor of announcements/development of these new advancements would be governed by how profitable or how it disrupts existing income streams and profits. Companies may decide to hide / hold on to some of these advancements till they deem it is financially beneficial to them. The same can be said for developments made by the military and government research departments.

The entertainment and creative industries have done excellent work with depicting similar experiences. Games , movies and books have in the past have shown us how worlds with liquid user experiences can look, and a lot of the inspiration for writing article coupled with what I have seen today inspired me to document my thoughts.

In the future, imagine if your clients asked you to make sure your UX smelt like ‘the ocean’, or if they ask you to make it feel ‘colder’,…. how do you prepare for such a scenario? …..How will our role as creators and engineers learn to adapt to such an environment?

In a later article I hope to talk about how you can learn to derive inspiration for all your designs and work, and how to help you creatively come up with solutions to problems, and also how you could prepare for a ‘liquid UX’ world.

By reading this article I hope that all of this helped you to start thinking and dreaming of the future as I have. Thanks a lot for reading! 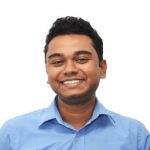 Locomotion in VR: Procedural Generation of a Scene

The future of design: Part 3 of a Design Sprint Trilogy